Here are some pictures of the notable computers I have used. 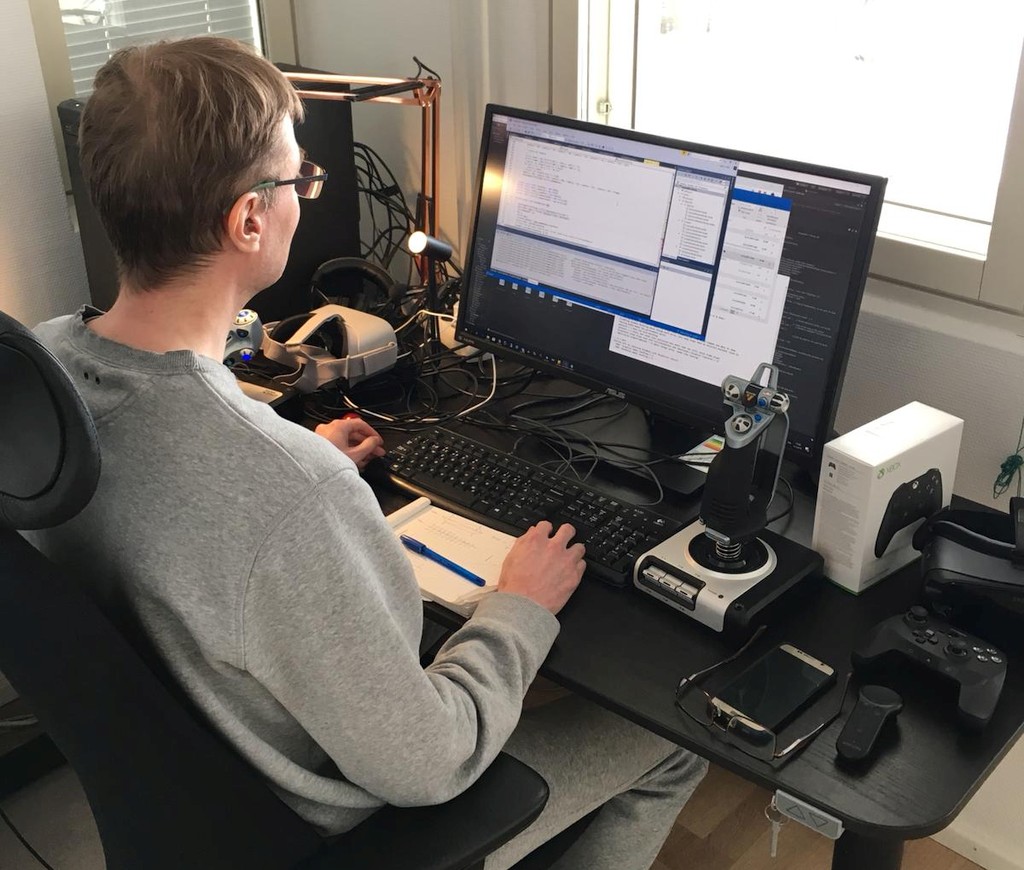 Here is a picture of me sitting at my current workstation in my new apartment (where I moved in December 2015). I am working on LineWars VR, and you can see the Oculus Go device in the background, and the Gear VR device in the far right of the picture. I am using an ASUS 4K monitor and a GTX 980 graphics card to develop VR software. The joystick is part of a Saitek X52 Flight Control System, which also includes a throttle. My PC has an Intel i7-6700T 2.8GHz low-power CPU, so it can be passively cooled and is thus very quiet. 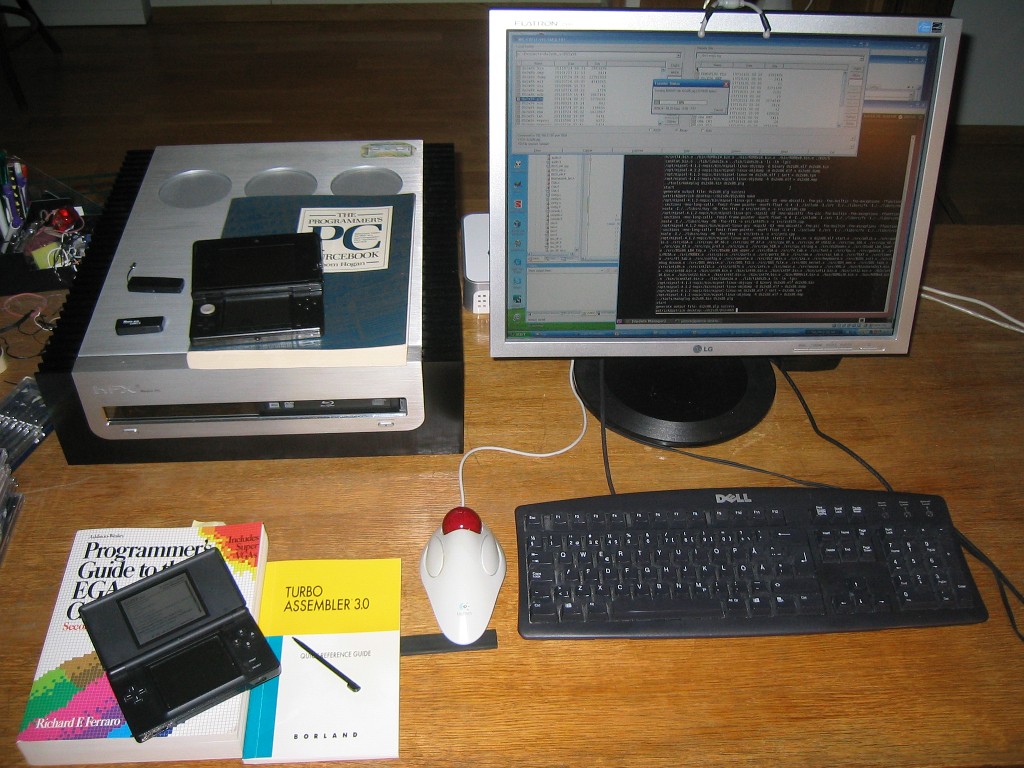 Here is my desktop computer setup, which I used in 2011 to build DSx86, for example. You can see I run Ubuntu Linux in a window within Windows XP, and I am currently transferring the latest build of DS2x86 onto my Nintendo DS Lite via FTP.

I use the mCubed HFX Classic Media-PC case, together with an SSD disk and passive power in my PC, so that it has no moving parts and thus makes no noise. The keyboard is from a long since dead Dell computer, which I purchased because it was one of the most silent computers available at that time. I like the feel of that keyboard so it has stayed my preferred keyboard even when the computers themselves have changed.

Almost completely hidden behind my monitor is my Mustek PowerMust Office UPS, which is very useful when living in a rural area. We get blackouts every now and then, usually during thunderstorms or heavy snowfalls, so having an UPS is very much worth the peace of mind it provides when coding software. 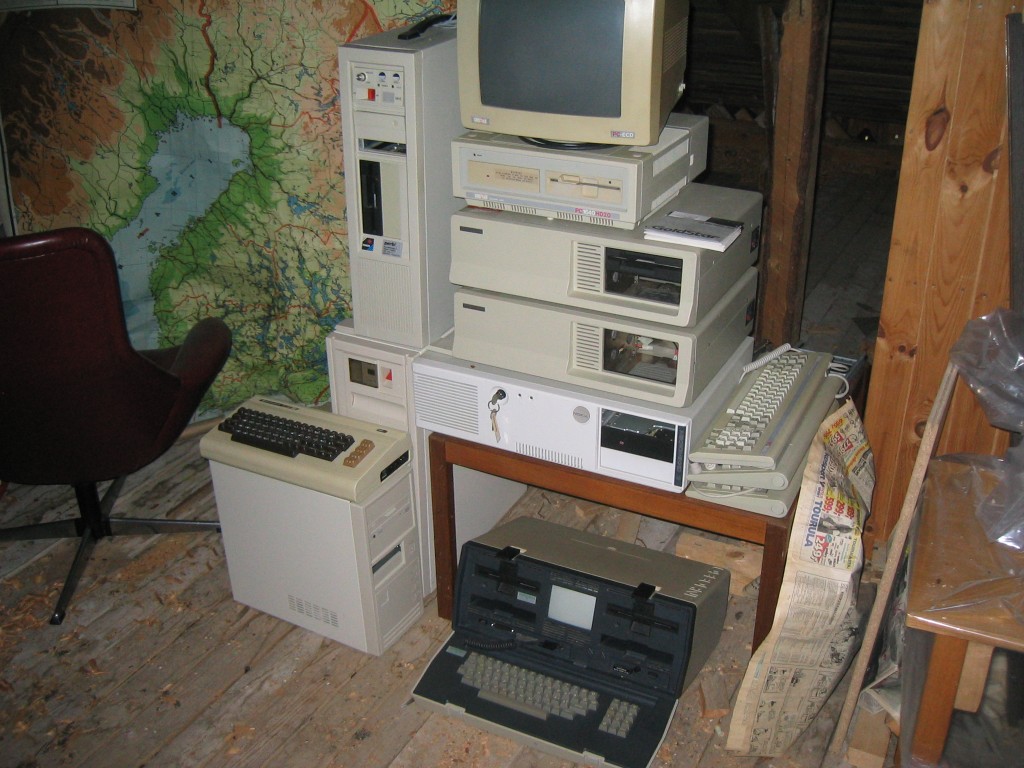 Here is a picture from the "Computer Graveyard" section of my attic. :-) On the left, on top of a much more recent Pentium 60MHz PC clone, is my very first computer, the Commodore VIC-20. I got it as a birthday present in September of 1982. On the floor under the table is my father's old "luggable" computer, the Osborne 1, from around the same time. On the table is first a Nokia MikroMikko 3, back from when Nokia still built personal computers. I think I got this from my workplace when they upgraded to more modern computers. On top of that are two Bondwell PC/XT clone cases, with most of their diskette drives stripped out. The topmost computer is my old Amstrad PC1640, with the ECD EGA display. On the left are a couple of huge tower cases, which I used for the early 486 computers.

This picture is missing the 5 different computer monitors and two extra keyboards I have stored somewhere else. 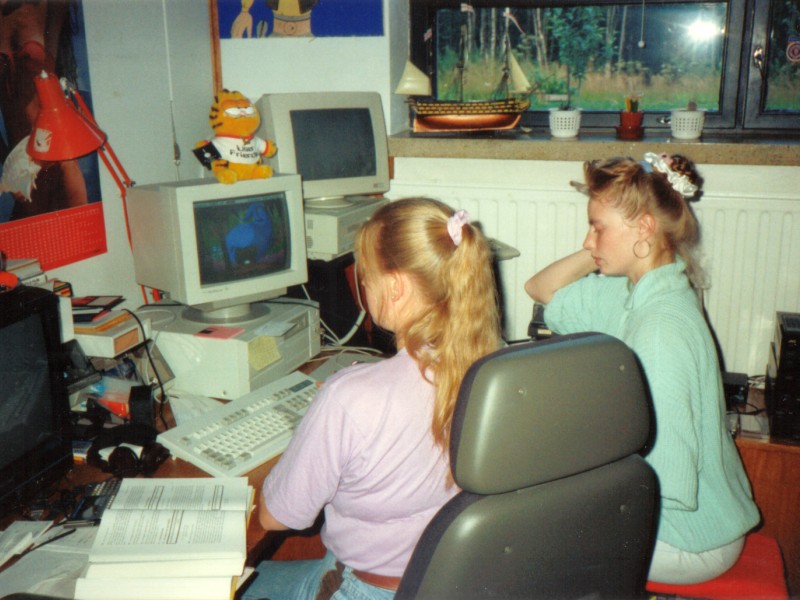 My cousin and sister playing Leisure Suit Larry on my new Hyundai-386C PC clone. The old Amstrad is still in the background. Looks like I have the Ferraro's "Programmer's Guide to the EGA and VGA Cards" book open on my desk, as I was already working on stuff for LineWars II at that time. I was still living with my parents, and my room had already become rather cramped with all the consumer electronics I had managed to collect by that time. 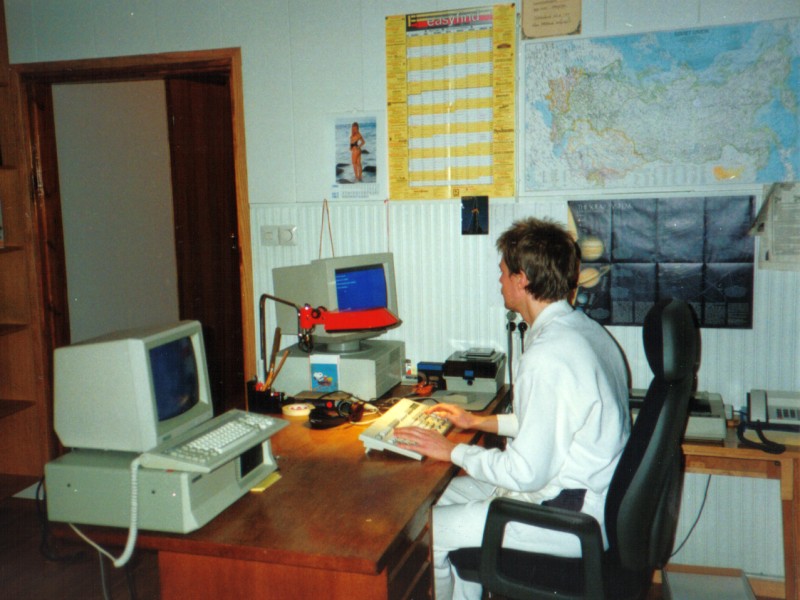 By the end of 1990 I had moved into my own apartment, so here I am working on my Hyundai-386C PC clone in my new apartment. The computer had a 20MHz 80386 processor, with a huge 80MB hard disk, so it was pretty fast after the 8MHz 8086 Amstrad. This is the machine I used to code and test LineWars II. I also have a Bondwell PC-XT clone with a Hercules graphics card on my desk, for testing how LineWars II will work on a slow computer with only a monochrome display. 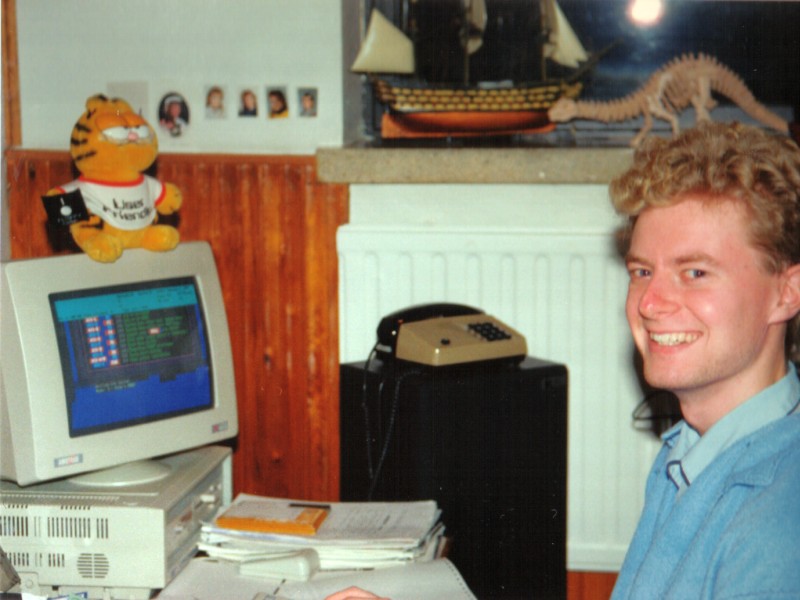 My first PC clone, an Amstrad PC1640. It had EGA graphics, so it was a bit more advanced than other XT computers at the time. This is the computer I used to build the original LineWars. 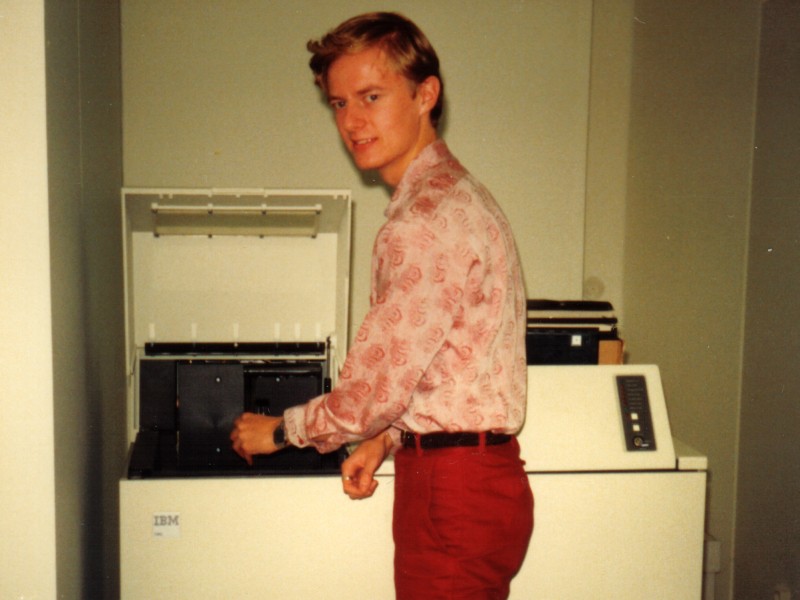 Here I am at my summer job in 1984, filling a magazine of 8-inch floppies into an IBM System/36 minicomputer. It was used by the company my father worked for, so I got a summer job to manage it.