Our Island Cottage on the Gulf of Finland

Our family (originally our grandparents, and now my father and his sister) owns a cottage on one of the islands in the Gulf of Finland. The island is called "Kuiva Hevonen", which could be translated as "dry horse" (don't ask me why it is called that!).

There are 110 cottages on the island, and also a nature preservation area. When we were kids we used to spend weeks every summer in the cottage, usually with our cousins. My grandfather was a keen fisherman, so he had a boat to get us to the island and back. There is no electricity or other modern comforts on the island, and no stores or other services. There is only a smallish boat, the size of a small town general store, that comes by a few times a week where you can buy food and other necessities. But, as a kid, things like that only enhance the charm of the place.

The most recent images are taken with a proper digital camera, so they are sized 1024x768, the older images are scanned from old photographs and do not look very good in sizes over 800x600. 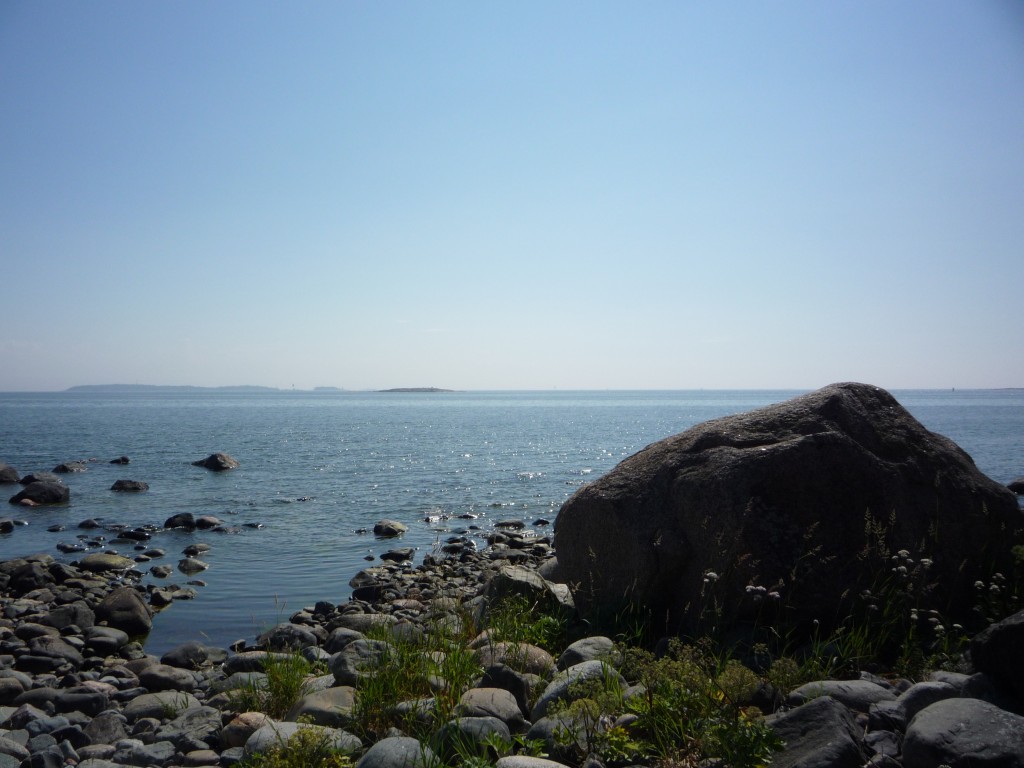 Here is a view from our cottage towards the sea (meaning south, towards Estonia). The closest island visible is called "Östra Rödhällen", and the one behind it is called "Eestiluoto". 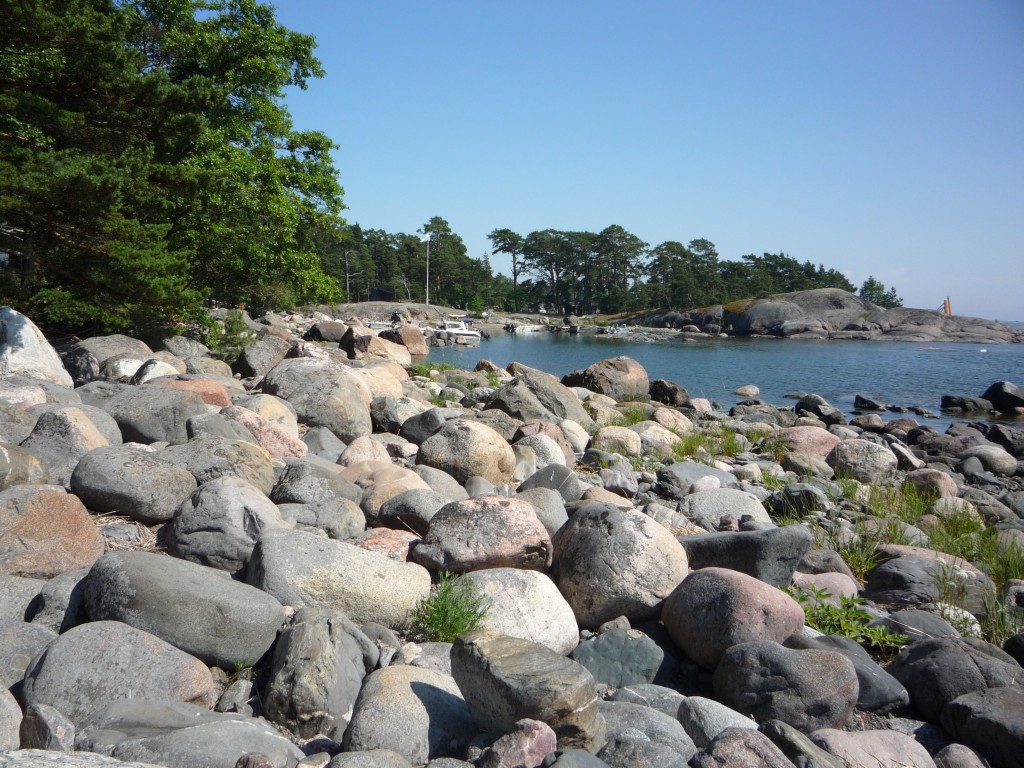 A view towards the boat cove of the island. 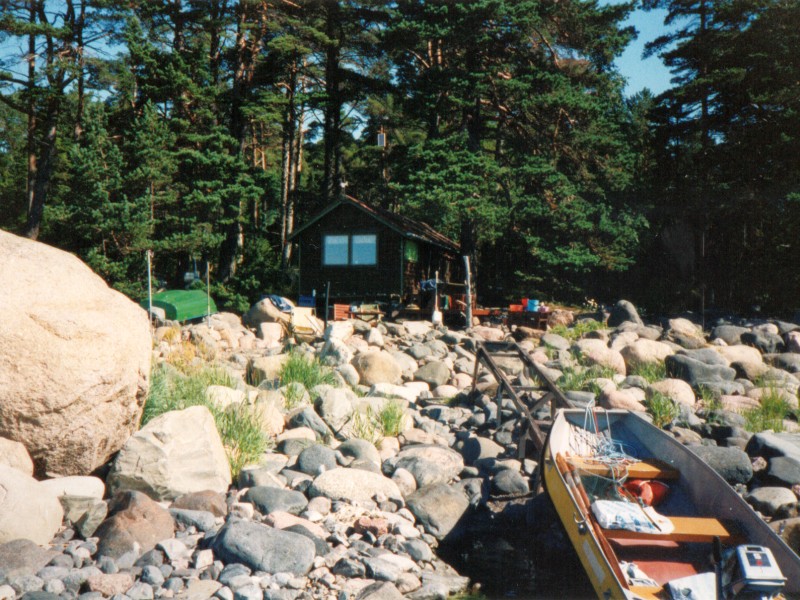 Here is the cottage itself. Not very fancy, but since the idea is not to stay inside the cottage during the days, it does not need to be. 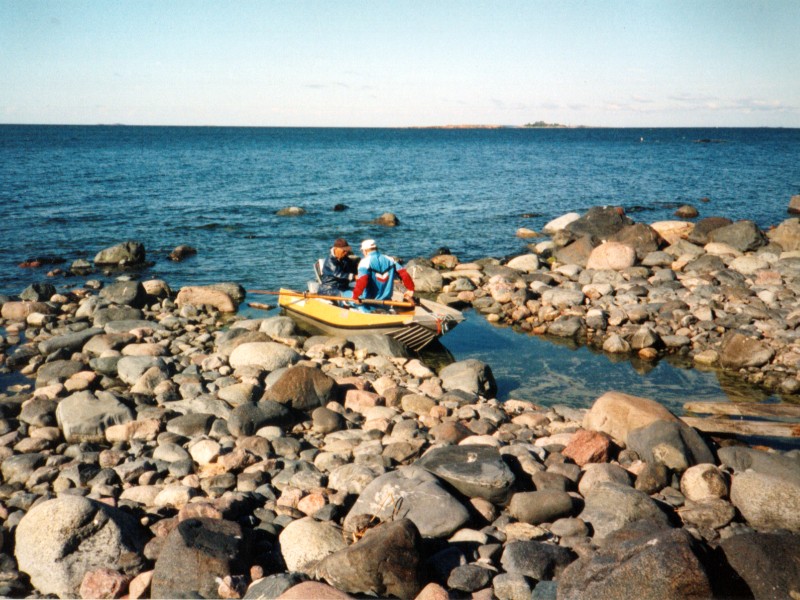 My father and grandfather going fishing. This was the last time we were on the island with our grandfather. A little while later he was diagnosed with cancer. 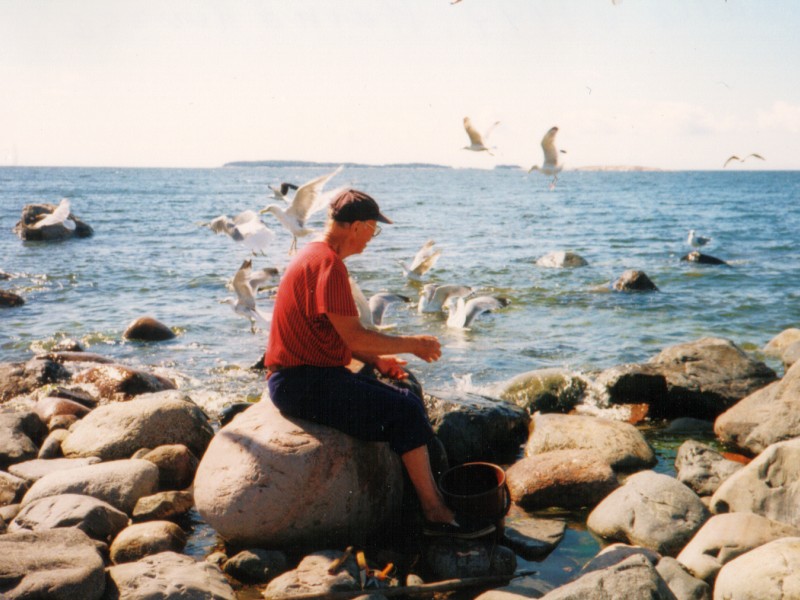 Grandfather preparing fish. The seagulls are pretty agressive when fighting over the fish remains, they sometimes even steal parts of fish from your hand! 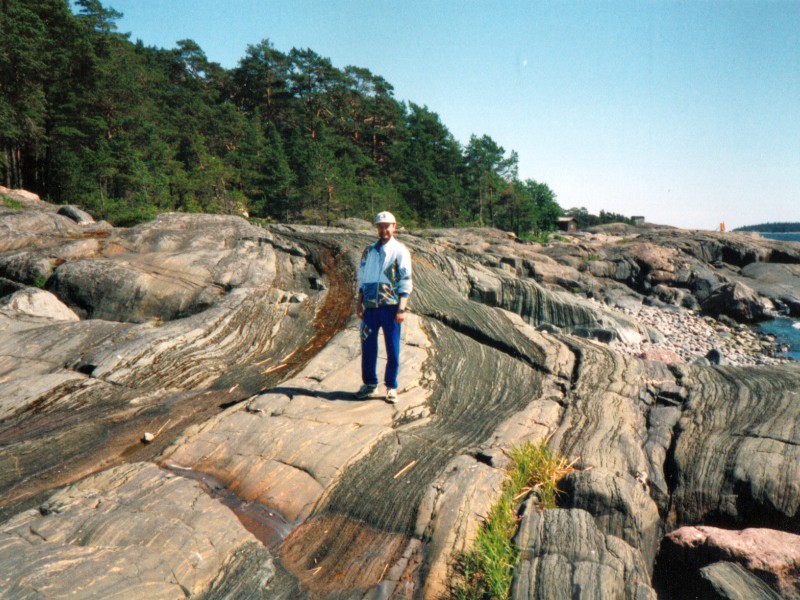 Here I am on the west end of the island, which is a nature preservation area. The ice age has left some interesting erosion marks on the rocks. 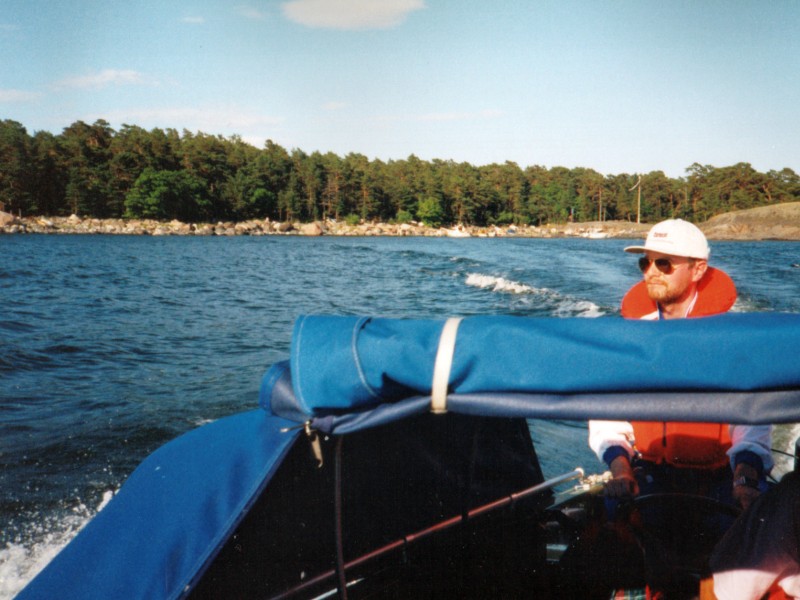 Then it was time to leave the island cottage again. I am driving the boat back to the mainland. Our cottage can just be seen on the extreme left side of the picture. 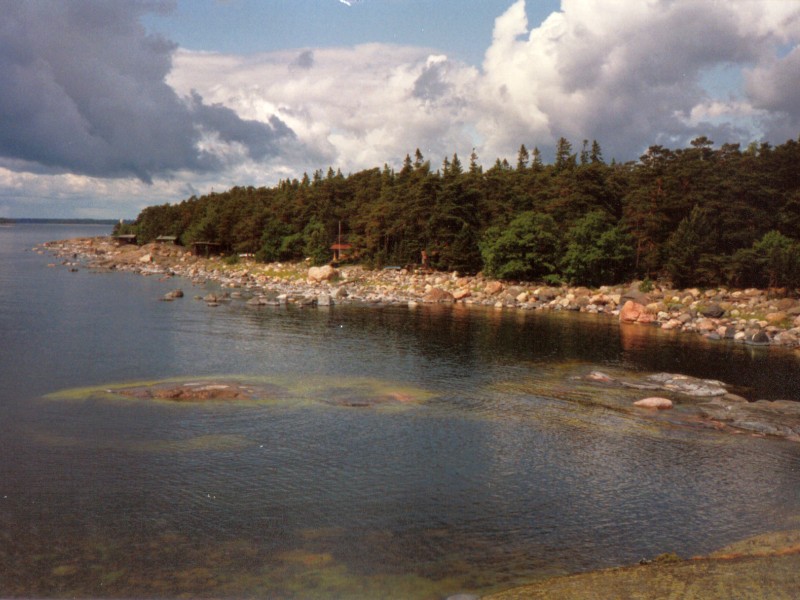 A view towards our cottage, taken from the rock beside the boat cove. Our cottage is almost at the dead center of the picture. 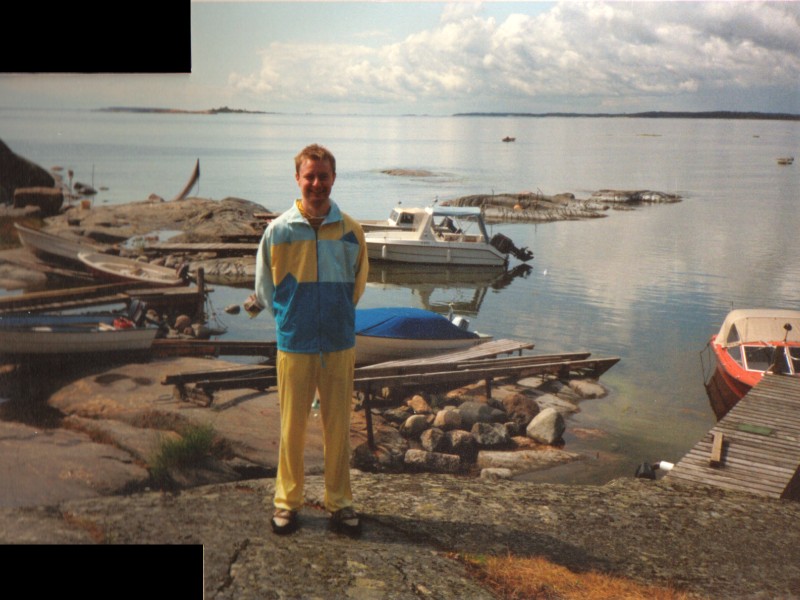 That's me standing in front of the grandfather's boat (the one with the blue cover) at the boat cove of the island. Probably my grandfather fishing in the background, from the smaller boat. There is also the Helsinki coastline visible on the horizon. 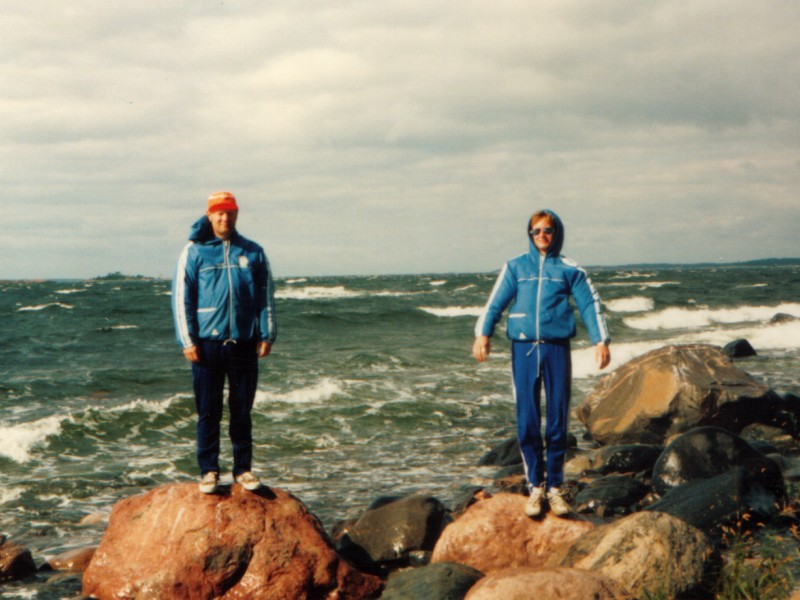 A windy day in 1986, with a picture of my father and me. Sometimes the wind would rise so quickly that we got stuck on the island, until the wind would ease up enough to safely drive the boat back to the mainland. It is important to have a radio and listen to the weather broadcasts when on the island. 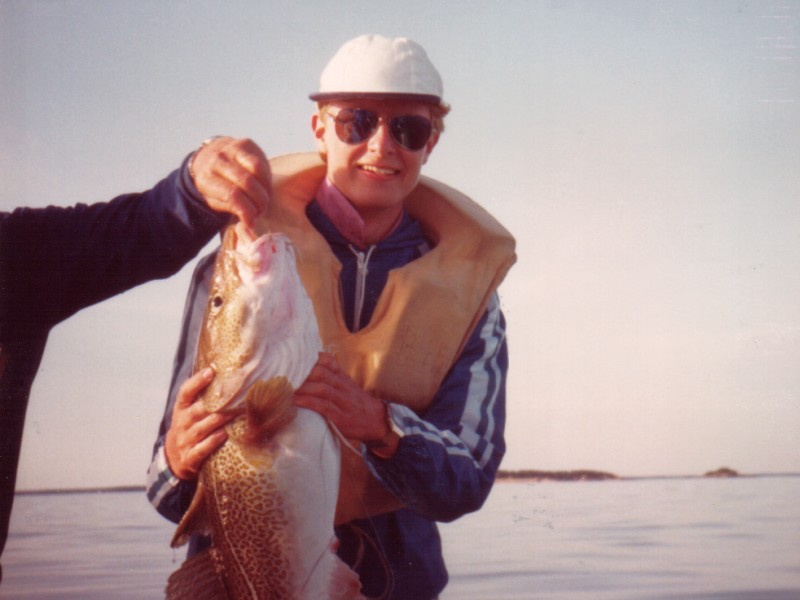 The biggest cod I ever caught, weighing over 5 kilograms! I wasn't terribly interested in fishing, but I did go along with my father and grandfather every now and then when they went fishing. Sometimes I even caught something, as you can see! 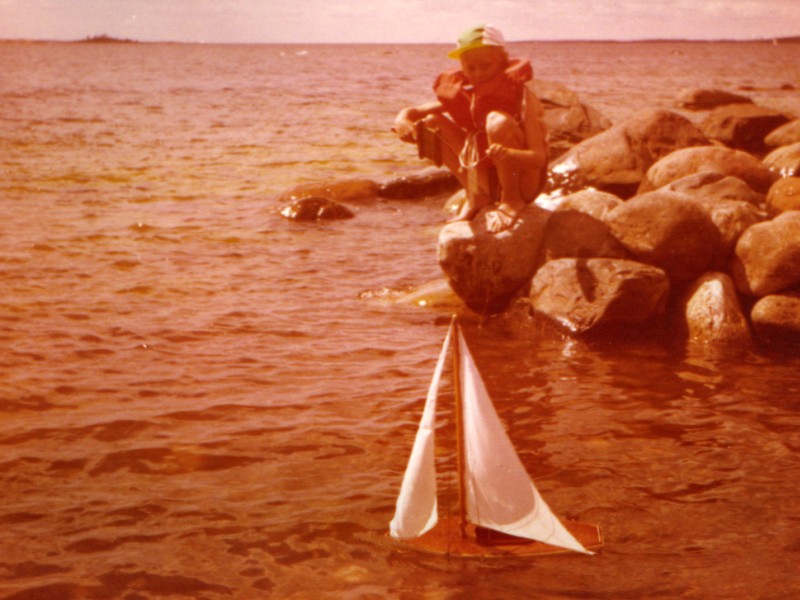 Playing with a model sailboat on the island in 1976. I used to always build some ship models in the spring, in preparation for when we went to the island in the summer. This particular model was built by my grandfather, though. That was the time before radio control equipment was commonly available, so we had to do with alternative ways of controlling the toys. :-) 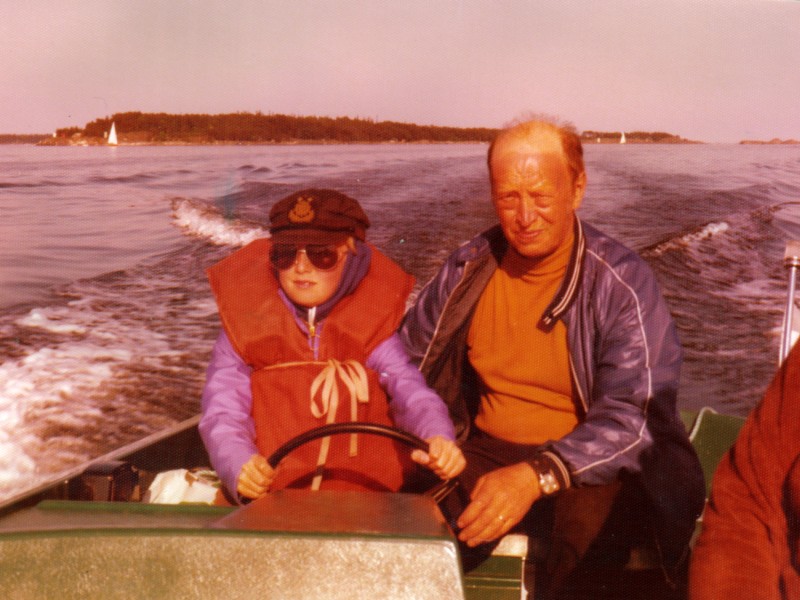 Driving back to mainland in 1975 (when I was just 8 years old). My grandfather usually let me drive when in the open sea, and it was of course pretty cool for a little kid to be able to control a big boat! The silhouette of the island is nicely visible in the background.